Last night we took another leap into full-fledged toddler hood.  We took down the rail on the crib and Macie slept in a 'toddler' bed. 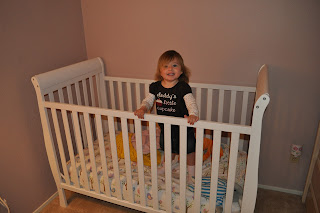 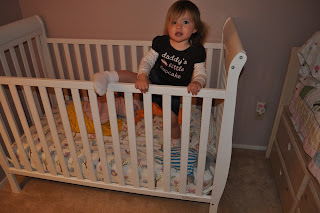 While she never climbed out of her crib (unless she climbed back in, ha!), she was showing signs that she was ready to.  She would put her foot up to the bar (which when standing was NOT a far way to go).
I didn't get a picture of her in her bed (I'm sure that will come) but she was SO happy about this bed.  We were nervous she would get out and not sleep, so we connected an old monitor to her room, but she didn't seem to have any problems sleeping.  Now, who knows if this was a one night fluke and now she'll realize that she is free, but for now, we'll call it a success.  Today's nap should be interesting.
I'm figuring there will be a lot of changes in her little life soon.  Mostly just related to growing up!  I intend to see about getting her potty trained by the end of the summer...She'll probably be in the real twin bed by the end of the summer (maybe?!), no more high chairs..?  Sometimes she eats in it, sometimes she doesn't.  Mostly she does.
So we're working on a lot of changes.  And that doesn't even mention little Penelope.  She is just a darling addition, and some nights she has let me sleep for 4 1/2 hours in a row (which feels glorious).  Last night was not one of those nights, but DH got up in the morning so I was able to sleep from 9pm until 12:45am, again from 1:30 until 4, and then from 4:45 until about 7.  That's actually a lot of sleep.  It's just not very good sleep.  Ha.  But I'll still take it.  She's a full 3 weeks old, AND I should update that at Wednesday's weight check appointment she was 6lbs 14 oz.  If you count, that means she gained 13 oz in just 5 days.  Um, apparently she was hungry.  So we're still breastfeeding and then supplimenting 'round the clock here.  It seems to be going well.  We have another dr. appointment on Monday.  That will tell us if she's still growing well.  Oh, and she was 21 1/4 inches long.  THat put her at 8% for weight and 75% for height.  I have a feeling that in no time she'll have chubby cheeks like her sister, perfect for kissing and squeezing.  I still haven't taken a picture for birth announcements that I love, but I figure I have a few more months before I need to send that stuff out.  We'll do big, professional family pictures in November.
Enjoy the weekend!  We're off to cousin Logan's first birthday party later today.  Should be fun and hopefully lots of pictures.
Posted by Courtney at 10:19 AM

I am no where near ready for that! I am imagining lots of parties in the room, that mine share!

We are trying potty training this summer. I'm nervous but so tired of dealing with/paying for diapers!

Those are pretty good chunks of sleep, for a 3 week old. That's awesome! I have no idea how I survived on such little sleep. I was a mess!