It is with tons of excitedment that I can introduce Miss Penelope Doroth.y Marquez!  Penny for short. She was born Friday March 23rd at 5:12 AM.
On Thursday I had a Dr. appt. where I was 2-3 cm, but still a really long cervix.  This was 1 day past my due date.  The Dr. stripped my membraines and scheduled an appointment for Friday afternoon to do the same thing again.  Then the Dr. asked if I was interested in being induced on Sunday because she was on call that day.  I was a little conflicted because I hated to be induced if the baby wasn't ready, but I was sure ready.  So Thursday afternoon I was playing with Macie and she and I were bouncing around the living room.  I laid down on the couch and when I sat up I felt a slight 'gush'.  So I had to ask myself, was that my water breaking?  Was that my bladder leaking?  I spent the next 30 minutes looking up how to tell if the water is broken.  All signs pointed to yes.  So I called the Dr. office and the nurse said not to wait, to go straight to Labor and Delivery.  I called Dh who was finishing up lesson plans at work, and my mom who was going to watch Macie.  I finished packing my bag, but since I wasn't in actual labor, I didn't know if I was going to be coming home, if maybe I was just being paranoid and my water hadn't broken....there were lots of questions.
Dh and I grabbed a quick bit on the way to the hospital and when we got there they had me disrobe, etc. but it took about 2 hours before they actually checked if my water had broken.  It HAD!  So we were informed we wouldn't be leaving without a baby in our arms.  That was a nice comfort.
The dr. waited about an hour to see if my contractions would pick up on their own (I had been having mild contractions for about 3 weeks, and there was no change).  So about 9:15pm they gave my pitocin.  It worked and I started having regular contractions.  They decided to do internal monitoring for both contractions and fetal heartbeat, mostly because those external monitors just mean you can't change positions at all.  Before midnight I was really uncomfortable with the contractions, but I didn't want to get an epidural prematurely.  They checked me and I was at 4cm, the nurse said I could have an epidural if I desired.  I actually battled a little bit, because I felt like the pain was manageable.  The nurse assured me that there is no solid evidence that an epidural will slow down labor* (discussion in another post to follow).  I got the epidural...and it felt WONDERFUL!  Seriously.  Yes, I could have tolerated labor.  But WHY?  I had virtually NO pain after that, even through delivery.  And I had an epidural with my first delivery, so I don't know how I could have forgotten how good it feels to be pain free while your body is dialiting.  It was wonderful.
The nurses pretty much left us alone from midnight until 4:30AM when they checked me again and I was at an 8.  She fixed the monitor and I was instantly at 9.  So she started getting the room ready and the baby nurses were getting ready.  By 5 the nurse had me do a push to see how it would go.  Immediately she asked me to stop and called for the Dr. to come for delivery because she said the baby almost came out with the one push.
The Dr. came in a few minutes and they got ready.  The epidural was really strong, and I couldn't even feel when to push (not like the first time where I felt the need to push very badly).  But they told me to push, and in that one push the head was out.  She had me stop to get the shoulders out, and at 5:12AM we had the baby!
Penelope started crying after a minute or two, but even I could tell she was having a little trouble breathing.  She was a little pale, but she did start whimpering so i knew she could breath.  The nurses had to put a few things on her to get all the mucous out of her lungs.  She had 'Wet Lungs', which is common, but makes breathing a little difficult at first.  The thing is, I wasn't even upset, because I've watched enough ba.by story to know that since she wasn't being taken to the NICU all was going to be okay, and it was. About an hour after she was born the nurses said, oh good, her color looks better, and they admitted they'd been a little worried.  I told them I knew they were but I wasn't, and all was well.  Over the next 24 hours Penny did cough up some extra fluid, but that seemed to have stopped by the next day.
Did I mention she was 6lbs 10oz?  21 inches long.  That's the same length as her sister but almost a pound less. That may have helped with the pushing.  I have to say, that having this second baby was SO much easier.  I think a big part of it was that I only tore to a level 1 instead of 2.  I was up and around within a few hours, although my sea legs were a little shakey at first.  My bleeding hasn't been too bad, and I started on the stool sof.teners while at the hospital, so even BM's haven't been bad. 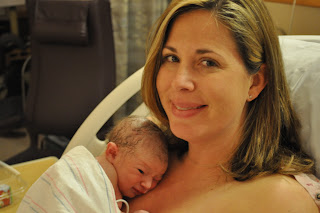 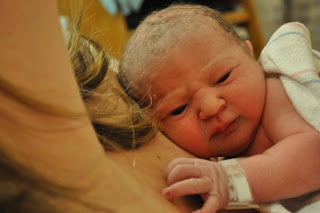 I honestly feel great compared to last time.  So good that she was born Friday in the AM and we left the hospital Sat before noon.  We just wanted to be home and ready to start our life as a family of four.
Big sister Macie is so far adjusting well.  Penny seems to have her days and nights mixed up, so of course we're sleep deprived, but she's well worth it.  Breast Feeding feels much more successful this time.  Tomorrow afternoon we have a well baby/mother exam with the hospital so we'll be able to weigh her and see how she's eating.  She's been nursing quite a bit, and my breasts feel engorged so I'm thinking my milk is coming in this time.
There is a ton more to say, but I didn't want another day to pass without sharing our news.  Thank you for praying and I can't wait to catch up on your lives as well.  Welcome Penny!
Posted by Courtney at 1:49 PM 5 comments:

Random thoughts from a mother-to-be

Every morning I wake up and think, was that my last night of 'good' sleep for the next 6 months?
How will my 22 month old daughter react to having to share me with a little sister?
What if something happens between right now and holding this baby.  What if God has taken us this far only to call the baby home?
Will I get to the hospital in time to have an epidural?  What if the second child comes super quickly?
How much will this new little girl weigh?
Will I have the same breastfeeding issues I had with Macie?  Will I make more milk this time?
How on earth will I find the mental strength to go back to work in the fall, leaving 2 little ones behind!?
Will this baby be on time?  Tomorrow is my due date, will this baby make an appearance ...soon?

There are more thoughts, but I thought I'd share where my head goes most days.  Hopefully we'll get this girl here safe and healthy.  I'll keep you posted!
Posted by Courtney at 7:41 AM 4 comments:

Hey folks,
I'm still reading blogs, still short on time to write my own.  These days are so full, I have a hard time imagining what life will be like with two children instead of one.  Less blogging, I'm sure, but I'm still trying to record all the events in our family here. 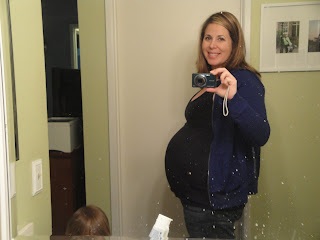 First, here is me at 38 weeks 6 days.  I don't think I look full term and I am constantly reminded of that.  People are shocked to hear I'm due in exactly 6 days.  I just chock it up to being tall, and all my height is in my torso (I'm 5'9"), and fat.  Those two things mean you can hide a baby pretty well.  These are the first belly pictures I've taken in months and months.
I had my dr. appt today and she said I was 1-2 cm dialated, but last week she said I was a 3.  So after my "What!?" she just explained that I could've been having a contraction...blah blah blah, it just looks like this baby isn't in a hurry.  Which I suppose is good.  We want her to cook as long as she needs.
The other funny thing is that I have jury duty this week.  How does jury duty work in other parts of the country?  Here (in ca) you get summonsed by mail and then you call in or go online after 5pm of the previous work day and they tell you if you need to report.  You have to do this for an entire week.  So far I haven't been called in this time, but it's only thurs.  I could call in tonight and then be required to attend tomorrow.  I know they'll take one look at me and no one will put me on a case, but being pregnant doesn't get you out.  Also, I could have postponed my service until 6 months from now, but then I would have 2 little ones to watch, and the days are much longer than my typical work day.  So it makes sense to just try to get it over with now, and hope I don't have to report.
So after I find out tonight if I have to go in tomorrow I am going to start trying to walk this baby out.  I've been to the gym a few times (love that they have great childcare), and I'll probably go to Disneylan.d with my mom next week and try to walk this baby out there.  I'm getting to the place where I'm antsy about delivery, thinking of all the possible scenarios, but mostly I'm just praying for a healthy baby and momma.  (feel free to join me in those prayers!)
I hope you are all well, I'm sure I have more to say.  DH finally fixed the computer situation at home, so I can blog from a real computer instead of phone, but it still requires Macie to be asleep or otherwise entertained...and that hasn't happened much lately without me.  Ha.
Happy Thursday (and the ides of march!)
Posted by Courtney at 1:07 PM 1 comment: