A Story to be Remembered...

You know how at some point, you start to realize that you're toddler is not a baby?  She walks (runs), eats grown up food, and stops needing 3 changes of clothing everytime you leave the house.  It's a mixed blessing to have a baby that is growing up.
BUT
Here is my story that will recount to all of you that toddlers still have lots of needs too...

DH, Macie and I hit up Di.sneyland on Saturday.  Now, the backstory is that Macie has had about 4 days of pooping 5 or 6 times.  Sometimes soft, sometimes hard, but lots and lots of poop.  We don't know if something in her diet changed that we can't pinpoint, or if she has some of daddy's spicy sauce on her rice and that caused it, but generally, it just means she's had a really red bottom (ouch!) and we're ointmenting it up.
At Disneyland, she said 'poopoos' at dinner and then a few minutes later, we smelled it.  So I took her into the bathroom at fan.tasyland and they have to baby changing tables (formica countertops, nothing special - the childcare center is where you have breathing room to change them).  I put her down and realized this was no ordinary poop.  She had been wearing a big coat (because hello, it's like 55 degrees out and we so.cal folks have no temperature control.  Everything below 72 might as well be freezing), and underneath that, her pants had exploded with poop all the way to her shoulders.  SHOULDERS!  She hasn't had a poop like this since she was 2 weeks old!  Apparently as I had carried her, my arm had been under her jacket, so the poop is now all over the arm of MY jacket!  And as I'm chaning her, I had done the public bathroom thing and laid the clean diaper underneath the dirty diaper to avoid her adorable bottom from having to rest on the surface where 100 other unknown baby bottoms had been.  This meant I ruined the next diaper before I even put it on her.
THat's when I realized this situation was far from under control.  The bathroom is crowded, there's a line of moms waiting to change their children's diapers, and I am stuck.  I have no hope of getting out of there anytime soon.  So I just mentally accept that this is my opportunity to be the parent all the other parents look at and think, 'gosh, I'm glad that's not me.  How embarassing for her'.  I start pulling off all the soiled clothing and thinking what am I going to do?  I don't have more clothes...until I realized I DID!  I had her PJ's with me (because she typically will fall asleep on the 20 minute drive home and hello, toddler already asleep, why wake her up?  Just bring PJ's!).  But if I didn't, I would've had to have left the bathroom with baby in diaper (and aren't I thankful that at least I still bring like 2 or 3 extra diapers with me incase something like this happens?  But no clothes anymore.) and walk her down to main street and pay way too much for a micky onesie for her to wear home.  But the PJ's saved it.  And I mean those clothes were COVERED in Poop.  I couldn't even rinse them out because it would've involved getting them soaked (and remember the super busy bathroom and super cold temperatures)
The lowest point for me, was when the 3rd woman next to me (who did not speak a word of English) kept looking over at me and shaking her head.  She then put her diaper wipes on the counter between us and patted them, essentially telling me to take a whole bunch (I took a few because I needed them, then I took a few more...then she pulled our 5 or 6 more and put them next to me.  I used them all.  She laughed as she left.  Not meanly, just laughed.).  I appriciated her nice-ness.
And by the way, my daughter was now the one who's bottom was spreading poop all over the counter.  Remember how I don't want to put her naked bottom on there?  It's because of mom's and poop stories like this that I always wipe down the counter before hand.  And I will even more so continue to do that now.
When I was finally ready to exit the bathroom, soiled clothes in one hand, pj'd toddler in the other, it had been about 15 minutes since I had gone in.  DH had his own funny story.  At about 5 minutes, he was telling himself, 'that must've been a bad one'.  At 10 minutes he thought, 'okay, now I KNOW that was a bad one'.  Around 15 minutes, he heard two ladies exiting the bathroom say to each other, 'could you believe how much poop that mom was dealing with!?'.  Then I came out and when he saw Macie in her PJ's, he instinctively knew it had been a trying 15 minutes.

The story ends well.  Macie rode the carousel in her PJ's, none the worse, and enjoyed herself.  We headed home and she got a big bath the next morning (because of the whole, sleeping toddler thing).

She may be growing up, but I think she'll still need my help for a while.  And why do we do all this? 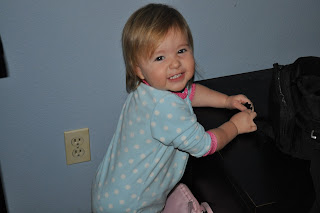 Because she's just so much fun.
Posted by Courtney at 3:22 PM 3 comments: 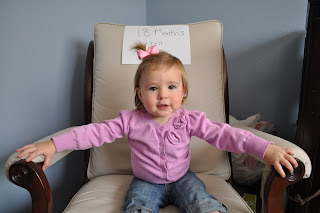 Macie, You're so.much.fun.!  Seriously, I couldn't be more excited about being your momma.
Stats:  At your 18 month check up you were 34 inches tall (96th%).  Only one more inch before you can go on the Gadget Roller Coaster in Toon Town!  Maybe after mamma has your baby sister we can go together.  By then you'll surely be taller than 35 inches!  You were 28.8 Lbs.  (92%). and your head was 86% (I don't remember the measurements).  The doctor said you are the perfect height for your weight and your progress is exactly where it should be.  You probably say around 15-20 words.  Some of your favorites are: 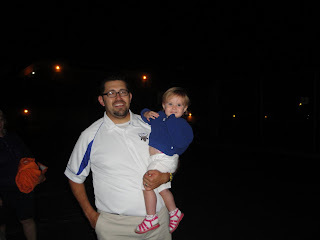 Football!  You went to 9 of 10 of Daddy's games this year.  While they did well, they didn't make it to playoffs, but at least now his reward is more Macie time!  You also met our mascot (we're Brahamas - Bulls to you and me) and I got the CUTEST picture.  Check you out.  You mastered the high five (just barely.) 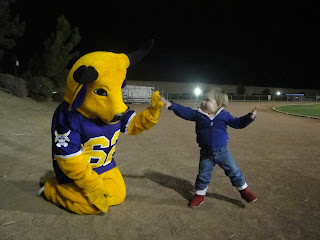 You are running everywhere, that's nothing new.  You are trying to jump (almost!) and you L.O.V.E to dance.  You move your hands in the air and down again and twirling...you love to twirl.
You've got the music in you.  You'll sit by momma at the piano and while mommy plays you help her and play a whole bunch too.  After about 15 minutes though you've had it and you want mommy to stop playing and play with you (which I'm only too happy to do).﻿ 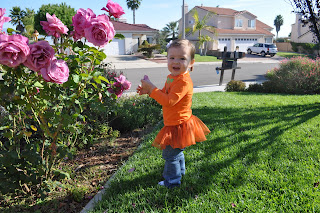 You are an outdoorsy baby too! (when do I have to stop saying baby? You look like such a little girl!)  You enjoy playing outside and even now that it's cooler (like 60's ... ha!) you still love to go out with your cute jacket on. 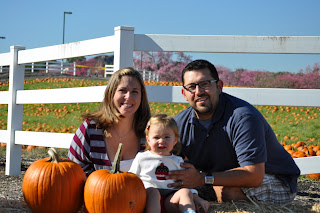 We went to the pumpkin patch before halloween.  We even took some pictures with your cousin Logan. 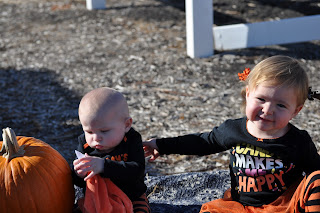 I don't know that he was interested, but it sure was cute.
Other words you say: Up (for both up and down), more, please, No (with a very cute tone.  I don't know how long it will be cute for though), go,go,go (when watching football), and many others.

You are really starting to enjoy books!  Just recently you found the 'No David!' books.  I don't know if your daddy loves them, but you sure do.  I think it's because it's a word you can say.  You enjoy being read to every night before we pray.  In your children's Bible you flip right to the back and just look at Jesus and the little children.  I hope you grow up to love Jesus.  More than anything.

You eat just about anything, but of course from day to day your tastes change and something you liked yesterday you don't like today...but we're dealing with it.  I think Nana would make you just about anything you wanted, but Mommy and Daddy don't want you to be picky, so we just tough it out.

Speaking of toughing it out, you've had multiple time-outs.  You are so fun, and with that comes a strong personality (where did you get that from!?).  You love to stand up on your chair while staring us in the eyes, daring us to do anything.  We give you a warning and if you do it again, you get the naughty stool.  It's too early to tell if it's working, but since you generally cry, we figure it's probably doing something. 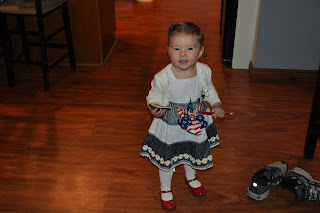 Macie, You're a sweetheart, and we love you so much.  I hope you keep growing just as you are and let us love you for a long, long time!
Posted by Courtney at 6:44 AM 4 comments:

It's amazing what you can do with 55 dollars...
You can eat a nice meal with your spouse.
You can fill up a small tank of gas in your car.
You can have your dog groomed. 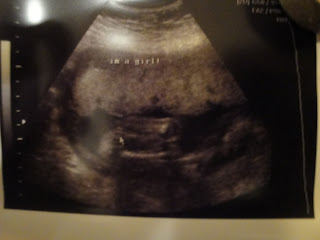 You can find out the gender of your baby!
Looks like Macie will be having a sister in March!  I was going to try to wait until our next Dr. Appointment in a few weeks and ask for a gender confirming ultrasound, but yesterday we were gathered with family, and we had lots of stuff to catch up on.  My brother and SIL are moving - they finally sold their house.  We were discussing the holidays, my father being in rehab (which is a good thing), and I just got this overwhelming urge to find the gender.  So I made a joke, "I have half a mind to go to pr.enatal pe.ek and find out the gender".  The whole room (including DH) said "okay!".  So before I knew it people had looked up the phone number on their iphones and I was calling, they said "Come in now", and 55 dollars later, we saw our little girl!
I still mean it when I say that I couldn't be dissapointed.  I just want a healthy baby.  And that's sooooo true.  But golly, I'm excited when I look at all the nice stuff Macie has (bedding, blankets, CLOTHES) and I think that I am grateful that I get to re-use them.  I didn't grow up with a sister, but I always thought it would be fun.  DH said he's going to start a Da.ve Ram.sey enevelope for femine hygene products.  Ha. (holler if you have drinking from the FPU/D.ave Ramsey coolaide!). 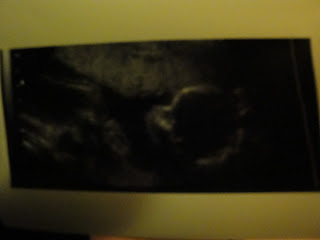 So I have been a terrible blogger as of late (what can I say, teaching 4 classes, plus raising an 18 month old (tomorrow she'll be a year and a half!, and being 20 weeks pregnant has taken most of my energy).  If it weren't for daylight savings time I don't know if I would've have even had a moment for this post!
Here is the big sister in her crib.  I love that she looks like she's posing in this picture. 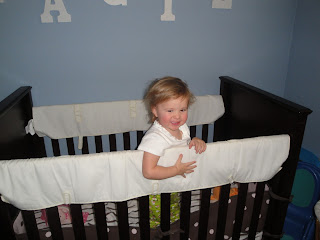