One Down, One to Go

Today marks the middle of the tww. The only difference is that this time I'm sure we hit the ovulation window. And by doing an IUI, we hit it with a hammer, right?
So far time is passing quickly, but now it's creeping into my thoughts more. And I'm thinking about baby names. I dread thinking about baby names because I think each month that's the part that makes me the saddest. When I actually start thinking and talking with my dh about the possible baby names. And then AF comes and does her business all over the names I have in my head (my goodness I just painted an ugly word picture...sorry 'bout that).
So next Tuesday is 14dpo.
After IUI, when is testing accepted? 14dpo? 12dpo? As long as I can hold out? I'll take any opinions you guys have on the subject.

Not much new, like I said, just waiting for next week. But while I'm waiting, did you hear about the woman out here in Southern California that gave birth to Octuplets?! Yes, that's 8 babies! The parents have chosen not to do interviews so no one knows if fertility treatments were involved, but I think we would all be shocked if that was natural. But what's ironic, is they thought they were dealing with 7 babies until they counted 8 umbilical cords! So far they're all reasonably healthy too. I honestly don't know if I would trade spots with that mom right now? Maybe I'd trade her when the kids are through potty training, but 8 kids? Yikes.
I'd like 1 please! (But believe me, I'll take what I'm given!).

Enjoy the rest of your week!
Posted by Courtney at 3:23 PM 10 comments:

So, the IUI is done, complete, and now it's up to the little guys to grab onto the egg and attack!

Everything went well. At the follicle check on Monday I was suprised to find 1 egg at 21mm. I'm pleased because there isn't that crazy fear of "oh my word, how am I going to take 3 babies to the grocery store!" but disappointed because the odds aren't quite as good with only one taker. But I am acutely aware that, "it only takes one good egg...".
So I'll take it.
Yesterday DH and I each took off from work early and at 11:30, he did his part (and he was really surprised there were actual magazines. The other places he's 'done it' have been regular bathrooms. ew.) and we had a quick lunch and around 3:00 they were ready for me. The nurse offered me some sort of pain medication which I was surprised by because I didn't think the IUI was going to hurt. I declined it because I had somewhere to be that night and while I didn't particulalry like the HSG, I figured this wouldn't even be that bad. So I emptied my bladder, Identified the sperm and we were off to the races.
DH's numbers were great. Really. Rediculously good. I say this not to brag, but once again to wonder "then WHY AREN'T WE PREGNANT YET!?". (I only wonder that loud in my head, I'm really very soft spoken.).
So then we came home and I put my feet up for an hour or so and then I had band practice for church. All was well until we got to 'Sing, Sing, Sing'. You see our church is celebrating our one year anniversary and we're putting on a worship/celebration night next weekend. And the band director thinks it would be cool if during the band breaks the whole band jumped up and down. Um, that is really hard for a guitar player trying to keep rhythem, but htat's a whole other issue. So we were having fun and before long I realized...
AM I CRAZY?! I'VE BEEN INSEMINATED? AM I JUMPING UP AND DOWN? Fortunately that was the final song of the evening, so I packed up and cried all the way home thinking I just shook my husbands swimmers loose.
What a maroon. I told you ladies the clomid affected me this month! Crying like a baby and feeling like a bad mother before I've even had a child! Heck, before I'm even knocked up! I didn't know it was possible to have guilt about something that hadn't even happened yet.
So I calmed down and laughed at myself with DH. Then I went to bed!

Today I had to report for Jury duty. I didn't get on a case, but I think inspite of everything I've written, God has his hand in this. Even if this isn't our month, it was good to be able to go through the IUI process and not have to back out at the last minute (as I would've had to do if I had been summoned to report yesterday).

I'll look forward to staying busy during this 2ww, and catching up on all of your stories!
Posted by Courtney at 3:13 PM 10 comments:

This morning my DH and I took bets on how many eggs there would be cooking in my oven. I'm guessing 2 but he guessed 5! He thought my clomid effects were so much more than usual that this would mean big eggs. Then we had a discussion about whether or not to cancel if we had 5. I can't even imagine having 5 babies in utero. Ugh.

Question of the day, if you were having an IUI, how many eggs is too many to continue?

The good news is that I don't have to report for jury duty tomorrow, so as long as I have at least 1 ripe egg I'll be having an IUI tomorrow afternoon. Today my appointment was supposed to be at 9, but it got moved to 11:45. I'm just glad today's a holiday so I don't have to miss 2 days of work. As it is I feel badly about leaving early tomorrow, but I suppose we all have a season for being needy and having to ask others for help. It teaches humility, right?

Other than that I'm just enjoying a holiday morning and glad that the inaguration is tomorrow so I can move on to other topics in my Civics class. I'm not a hater, but I've been talking about the election for the past 3 months and I'm glad to talk about other things.

I will say that with this IUI I haven't felt particularly moved to talk about it. With other treatments there are people in my life whom I have let in to this IF part of me. But I just don't seem to have the gumption to bring it up now. I'm not embarassed, but I just think I'm still looking for the element of surprise on a pregnancy. I'm still a little messed up from this clomid I think.

I hope you all have a fabulous day and I'll look forward to actually having a few minutes to read your blogs from home. And just because I can only use google reader at work and can't leave comments doesn't mean I'm not praying for you and thinking about you ladies.

This is my 5th clomid cycle. It hasn't ever been a big deal for me emotionally.
But this time...

Um, I'm a little emotional, yeah?
If I have jury duty, I'm sunk. (I had already registered before I realized it would coincide with my IUI, so I don't think I can still apply for a medical excuse). last time I didn't have to report, so maybe that will happen again, yeah?
Only the Lord knows... 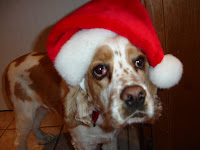 Here is an image of what we do to my dog at Christmas. Doesn't he look emo (that's high school speak for emotional)?
Posted by Courtney at 6:58 PM 6 comments:

Yesterday AF came. We tried 'naturally' this month so of course there wasn't a surprise when she came, but I'm still stuck on the odds. Never have we had even a positive home test. It's so weird. He's okay, I'm okay. Us together = no baby... I don't get it. I get that I need to continue to rely on God and to continue to believe that each month this could be it. But each month keeps passing without success.
But I still have my perspective. On Christmas eve one of my former principals was in a car accident and his wife was killed and he is still in the hospital.
On Thursday one of my closest friends dad was killed in a car accident.
Life is so precious and so short. Baby or no baby, I'm just happy to know that I'm living life everyday. I want a baby and I'm not hiding it. I hope I can hold on to these reminders of the preciousness of life. It's so easy to forget how fragile our world is.

Okay, so it's on to Clomid and then if no jury duty I'm going to have a folicle check on Monday 19th. Here's to hoping!
Posted by Courtney at 6:06 PM 2 comments:

I know this year will be happy. But I really want it to involved being knocked up. Hopefully sooner rather than later.
So hello to all you lovely ladies (and the occasional gentleman that may read this blog).
I'm back, still without child, but in good spirits about continueing our quest.
The plan is to do an IUI this month, but check it out: The typical day my eggs are ready is CD 12. Guess what is supposed to happen on CD 12 this month? My possible first day of jury duty. Oh NO! What do I Do? I'm scheduled for January 20th to call in. BUT, if we do an IUI, there is a good chance that those days would be IUI days.
I'm thinking that I'll play everything by ear and see what we can accomplish, but this may be God's way of putting things off for us just another month.

Here is also one more reason for me to 'be thankful' that I'm not pregnant (I'm working on finding joy in all things, even the really tough, crappy, infertile things) - my disability insurance at work just changed over. So had I gotten pregnant before January I wouldn't have been covered if I had to be on bed rest or anything over 6 weeks. but now if (when!) I get pregnant I'll have extra disability insurance that will pay me almost my entire salary after only 7 work days. So that is a blessing.
Now if I can just keep my job in this crazy economy...

Enjoy the start of a fresh week and I'll be poking around all of your blogs soon!
Courtney
Posted by Courtney at 6:34 PM 5 comments: